Heavy models are models which are complex to compute, where values likely to be contingent; that is where the value at each timepoint t depends on the values at t-1, t-2 etc. through to t=0.

This contingency can result in even a simple model causing stack overflows and other nastiness. Fortunately there are solutions, this document outlines one approach using the heavymodel library I have developed in Python.

A trivial example is would be a value which starts at 1 at t=0, and reduces by 5% at each subsequent time point. Without using the heavymodel library this could be written as:

This example could be run as follows:

As expected, this gives results as follows:

As it is recursive dm.var(10) will be called once, dm.var(9) will be called twice, dm.var(0) called 11 times, in total 66 calls.  For t=n, the total calls is n(n+1)/2, i.e. O(n²); If we were to introduce multiple dependent functions the number of computations would grow exponentially. We can see the speed using the ipython magic function %timeit:

To an actuary writing model and expecting execution similar to Excel, this can be a nasty surprise, and result in programming languages being rejected.

To minimise run speed (and avoid recursion and stack overflows), we want to evaluate each function at most once.

The solution can be achieved by inheriting from the Model class in the heavymodel library, which provides functionality to evaluate the user model. The example above can be rewritten as:

Model supplies a helper method _run which evaluates the model at each time point from t=0 to t=proj_length-1 (as python is zero-indexed):

Results are identical to the first case:

Timings are outlined in the section below.

Aside: The _run method is provided by the heavymodel.Model class, which is inherited by the user model class. It's implementation may vary but its purpose is to calculate each single argument user method starting from t=0 up to proj_length-1.

Speed comparison of the two methods

Timing dm2._run() is complicated by the fact that after the first run, results are stored for that instance. To provide a like-for-like comparison we need to create a new instance of the model for each evaluation:

Using %timeit over a series of values of proj_len allows us to measure the relative speeds, for example for proj_len=70.

A log-log plot of results is below. We can see that dm2 (the model using heavymodel.Model) has an increased initialisation time, but for projection lengths greater than 50(ish), dm2 becomes substantially quicker. At proj_len equal to 1280 and 2560, dm failed due to a RecursionError. 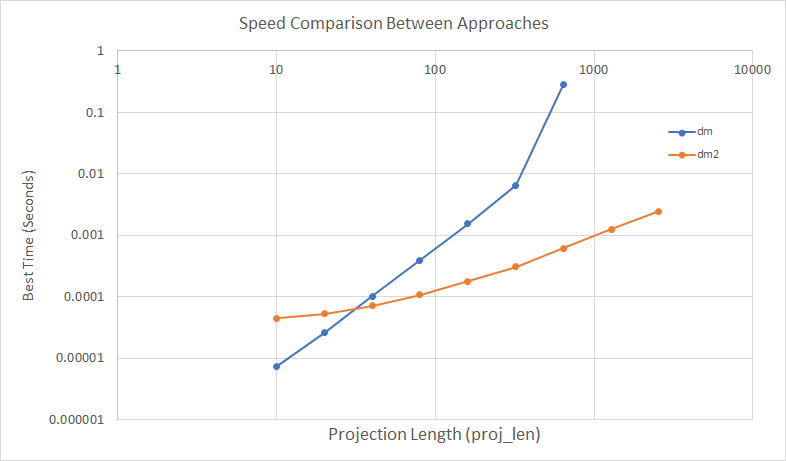 Given that most heavy models are likely to be run monthly for at least 20 years, a typical proj_len will be 240 or greater, and so the heavymodel approach should give substantial speed benefits.

If you are interested in other approaches, I recommend the OpenActuarial site.

From here you can search these documents. Enter your search terms below.